In this series, we take an in-depth look at some of the clubs that are using The Coaching Manual - this week, Rushmoor FC.

Written by The Coaching Manual

In this series, we take an in-depth look at some of the clubs that are using The Coaching Manual, what they think of the platform, and how they are using it to benefit their coaches and players.

In this instalment of Club Focus, we take a look at Rushmoor Community FC, based in Farnborough, England.

Who are Rushmoor Community FC?

The Club was initially formed in 1990 as Borough United by Martin Castle and a group of parents who started with one team of under 10s. The club quickly grew to 3 teams of differing age groups.

In 1996, Borough United became Rushmoor Sunday Youth as they joined the adult Rushmoor Sunday FC club based at Farnborough RFC, to provide a youth section with a natural follow through to adult football with a single team structure. In this year the teams comprised under 11/14/16 years, the under 17 team having progressed to senior football.

In 1998, Steve Read who was coaching the Cove FC Youth Section approached the club, as Cove were looking for a new home. After lengthy and in-depth meetings, the two clubs realised that both shared a common ethos with regard to the development of youth football and so the Cove players and staff transferred to Rushmoor Sunday Youth, with Steve acting as Vice Secretary.

Between 1998 and 2004, more active officials were put in place and the Club Constitution modified to suit the modern requirements of a football club. 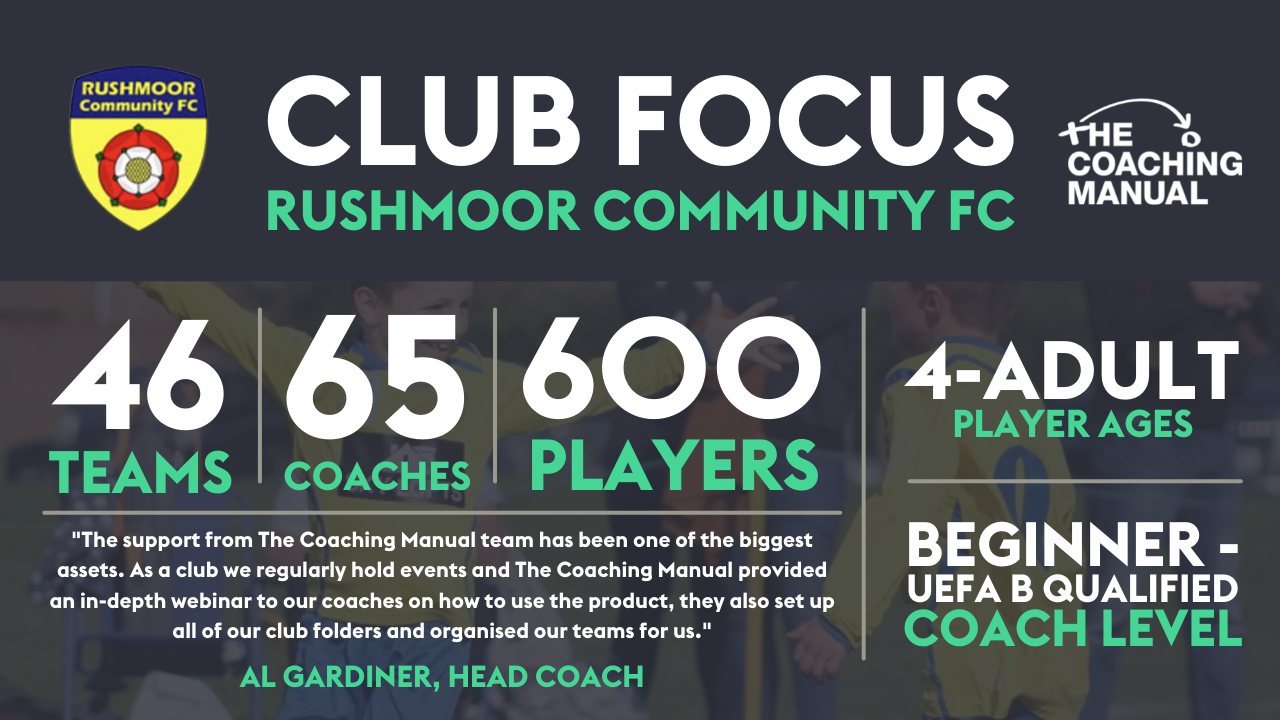 In 2004, after a great deal of hard work from all active committee members the club applied for the FA Charter Standard, and were awarded FA Charter Community Status, one of only two clubs in the area to achieve this (the other being Aldershot Football Club). This led to the name change to Rushmoor Community FC.

Rushmoor Community FC now has players from age 4 to 7 in their Nursery section, and a girls 'Wildcats' centre that feeds into their youth teams for both male and female footballers. Rushmoor's teams play in the North East Hants Youth League, Surrey County Women’s and Girls League and the Hampshire County Women’s League, operating teams that run from Under 7s right through to Under 18s.

In 2006 Rushmoor formed their first adult men's team who play in the Aldershot & District League, thus providing an exit route for our older youth players into adult football, representing a further commitment to the continued growth of grassroots and youth football within the Rushmoor area. In 2015 Alan Gardiner became the club's Head Coach and introduced girls football and the first women’s team to Rushmoor, who now has three adult women's teams and 13 girls' youth teams including the very popular aged 3-7 girls Wildcats centre.

The Club is based at Southwood Playing Fields, Grasmere Road, Farnborough, we are now hold the highest level award that a grassroots club can achieve.

Who is using TCM at Rushmoor?

All of our are volunteers and along with our committee members receive no remuneration for their work, we have around 65 coaches and parent helpers involved in the running of our 46 teams and over 600 players with a ratio of around 65% male to 35% female players

What has The Coaching Manual done for Rushmoor Community FC?

TCM's Head of Product Development Terry Barton said: "The Coaching Manual have been chosen by Rushmoor Community FC to provide coaches and players with world class content and support throughout the 2021-2022 season. The Coaching Manual has worked with Rushmoor to create a comprehensive folder structure within the platform, to help coaches and players find content that is relevant to their coaches regardless of the experience level of the coach and the age of the players.

"The Folders have categorised hundreds of training ideas and guides into a simple format, which takes all the hassle away from coaches who are using the platform. This includes content which supports brand new volunteers as they embark upon their football coaching journey as well as higher level sessions and content for those coaching the adult game and with UEFA qualifications."

What do Rushmoor think of The Coaching Manual?

Al Gardiner: "As the head coach I have been using The Coaching Manual for years. I introduced it to the club as a coaching product and tool that not only my coaches can use but also our players. The functionality of it as a coaching tool is unreal, mainly because it's an entire coaching manual in your pocket when you are late home from work and don’t have time to plan, get the phone out, find a plan, and coach it.  For those that are more structured, the age-related coaching folders that you can create yourself are perfect for setting relevant sessions to your age groups, but the season plan can take this all out for you.

"One of our head coaching group used the coaching manual to plan his entire UEFA B futsal qualification and religiously uses it every week."

With a club package from The Coaching Manual, coaches can expect ongoing help that goes well beyond technical support. From individual webinars to bespoke events and training sessions, we of course want you to get the best out of the platform.

Al added: "The support from Terry (Head of Product Development) and the team has been one of the biggest assets, as a club we regularly hold coaching events and The Coaching Manual provided an in-depth webinar to our coaches as a live stream on how to use the product, they also set up all of our club folders and organised our teams for us."

What can The Coaching Manual do for your club?

The Coaching Manual offers club packages for clubs and organisations of all sizes, enabling you to support your teams and coaches more efficiently while providing them with the best session content available anywhere online. Enquire today by emailing sales@thecoachingmanual.com.

The Coaching Manual provides some fantastic guides and education pieces for coaches to help better understand and support their players.

What else do you get with a Premium subscription?

For the equivalent of just £5 ($7) a month when you pay annually, sign up and start taking advantage of all that The Coaching Manual has to offer today.

Start your journey to becoming
a better football coach today

With plans to suit everyone, The Coaching Manual is the perfect resource for soccer coaches who want to improve their understanding of coaching and create a first-class soccer learning environment for their players.